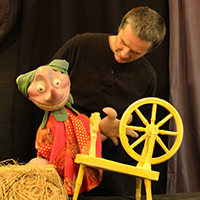 Jacek Zuzanski - Dream Tale Puppets founder, director, designer, and leading performer earned his MFA from The Ludwik Solski’s State Theatre School, Krakow, Poland, and obtained The Ministry for Art and Culture’s Stage Directing Certificate. He studied at Wroclaw Pantomime Theatre and The Academy of Fine Arts in Wroclaw, and participated in workshops guided by world leading theatre artists, among them the actors of the celebrated Theatre Laboratory of Jerzy Grotowski and Odin Teatret. He is a theatre artist and certified acting teacher with over 30 years of experience. Since coming to the US in 2001 to work as a theatre teacher for Island Theater Workshop on Martha’s Vineyard, he has cooperated with numerous schools, art organizations, and libraries, including Cape Cod Conservatory, Falmouth Academy, Puppet Showplace Theater of Brookline MA, and Polish Theatre Institute of NYC. The spark that brought Dream Tale Puppets to life was a series of simple improvisational “Story and Puppet Time” shows at the Cape Cod Children’s Museum. In the 2003-04 season we produced nine shows to the delight of Museum visitors. We next cultivated the two most popular stories, “The Three Little Pigs” and “Little Red Riding Hood,” and took them on the road for performances at Southern Massachusetts libraries, schools, and other cultural venues. “Rumplestiltskin” was added to the repertoire in 2005, “Jack and the Beanstalk” in 2011, and “Alice, or the Red King’s Dream” in 2020.